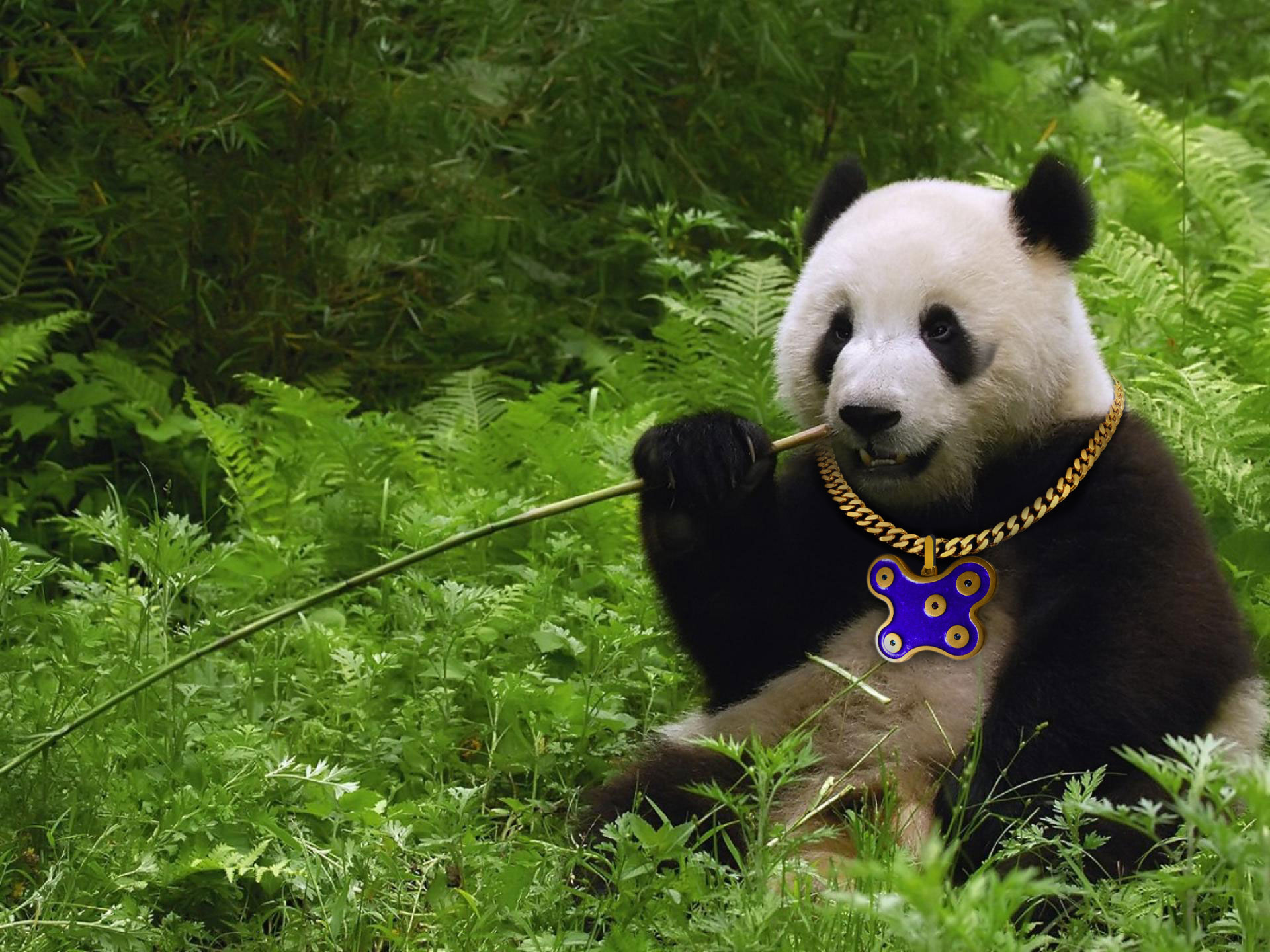 Artifacts from the Future

Client
Autodesk & Institute for the Future

My Role
Artist in Residence

This project is the outcome of a joint partnership between Autodesk and Institute for the Future (IFTF) in which I was tasked to explore possible future scenarios. The goal is to utilize the digital manufacturing capacity of Atuodesk's Pier9 Workshop to create a set of Artifacts from the Future.
‍
The theme for this set of Artifacts was wide open. I decided to focus on a subject that I've always found fascinating: animal communication, and especially the possibility of technologically mediated communication through Artificial Intelligence.
‍

What are Artifacts from the Future?

Imagine that you could take an archaeologist’s expedition to the future to collect objects and fragments of text or photos to understand what daily life will be like in 10, 20, or 50 years. Artifacts from the Future give us this tangible experience of the future. They make the details of a future scenario concrete, helping us to understand, almost first-hand, what it will be like to live in a particular future.
‍

Artifacts from the Future provide a rich starting point for strategic discussions, whether for a new products team in a technical organization or a community group looking for ways to engage young people in building a stake in their own neighborhood. Creating Artifacts from the Future is also a great way to get people thinking about the future—their assumptions, their goals, and the path from here to there.

This set of Artifacts from the future focuses on a scenario in which animals team up with artificial intelligence. It turns out they're really good at providing goods and services, and they end up dominating global markets.

At this point, if you're thinking this sounds like an unlikely future, you're probably right. 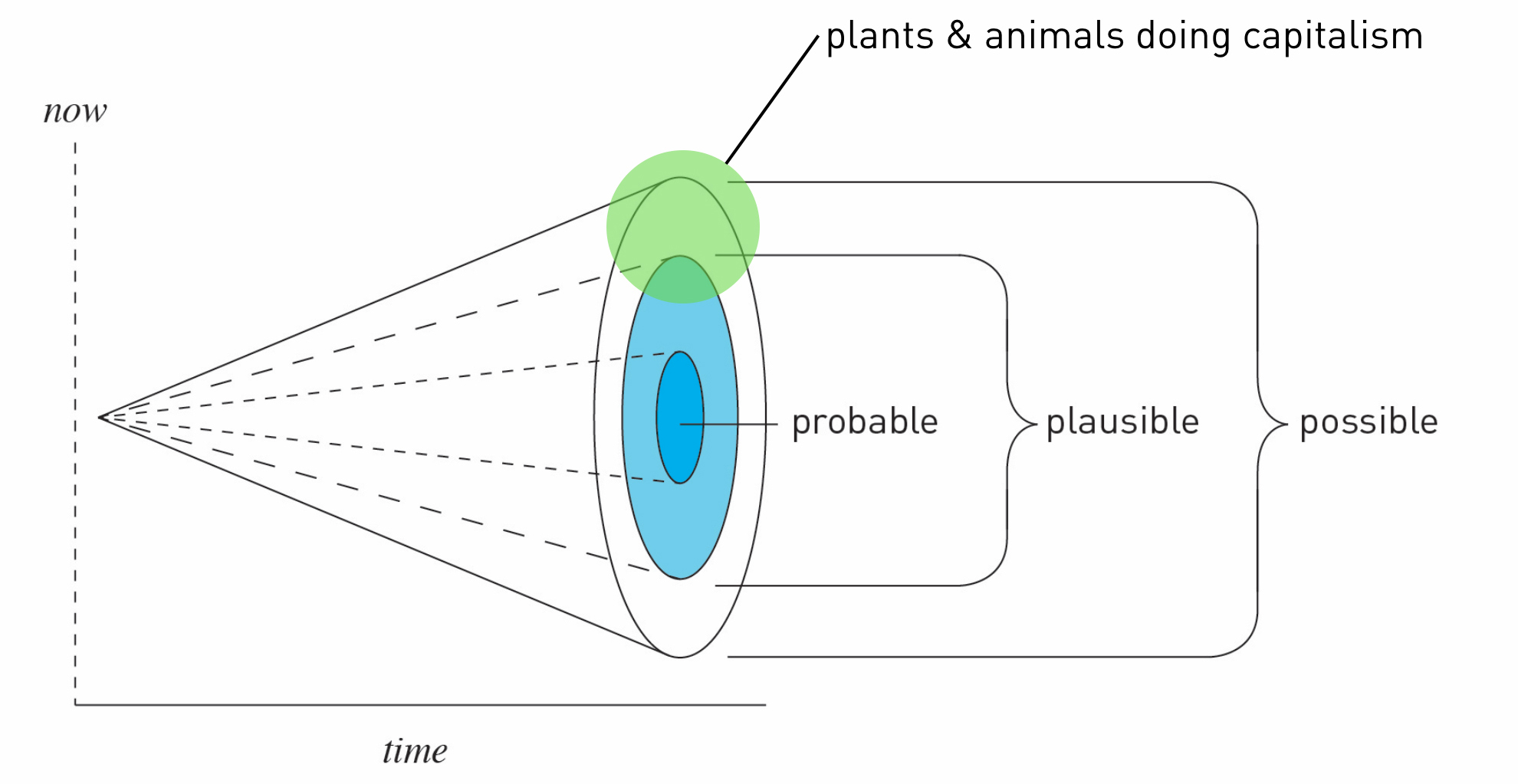 The Cone of Possibility

A common futures thinking model used to help expand how we think about the future is the Cone of Possibility. If you extrapolate the known trends of today, it is pretty easy to forecast a future that is probably going to happen. However, we know from looking at historical events that improbable things sometimes do happen. Looking back to the future, if we take into account the possibility of improbable events happening, the number of possible future scenarios will expand significantly.

Here we find futures which are plausible. Beyond the plausible, we can see an ever-expanding number of futures which are theoretically possible, according to the laws of physics. I suspect that Artificial Intelligence teaming up with Animals (and plants!) to do capitalism is probably not going to happen in the near future. However, it most certainly is possible, and maybe even plausible.

The Smart Bone Fetch Finder™, first created in the year 2027, empowers dogs to take control of who they are best friends with. In this future, dogs will approach people in parks and offer to play fetch as a service.

The first fetch is free, and additional play time can be purchased by humans through an app that pairs with the Smart Bone™. Premium services such as personal defense, and not getting your lawn pooped on can be purchased through premium fetch packages. 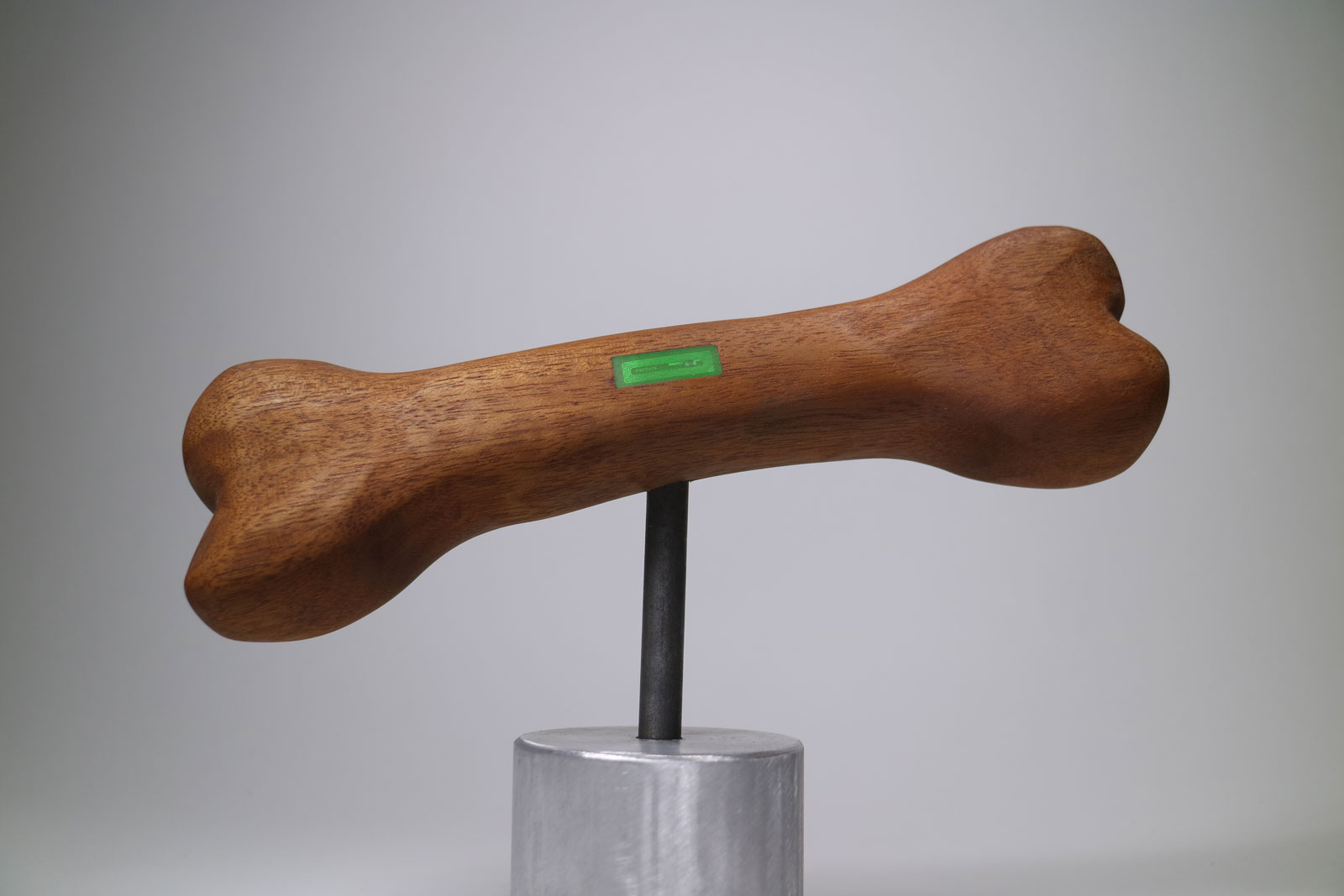 The unique pattern on this jewelry helps endangered animals enforce copyright claims on their image. This pattern is known as the Eurion Constellation, it is most often used to prevent money forgery, and can be found on most paper currencies around the world.

In the year 2032, the year Eurion Jewelry became a fashion trend amongst endangered animals. With new laws around endangered animals, it became unlawful to photograph, or distribute images and video of said animals without their consent. These laws were extremely difficult to enforce at first, but the introduction of Eurion Jewelry allowed AI lawyers to enforce copyright in real time.

The more charismatic endangered animals can fetch licensing fees that rival the biggest Hollywood stars. An unfortunate side effect of this technology is that some endangered animals have decided to keep their population numbers low, in order to maintain scarcity and keep the cash flowing in their direction. 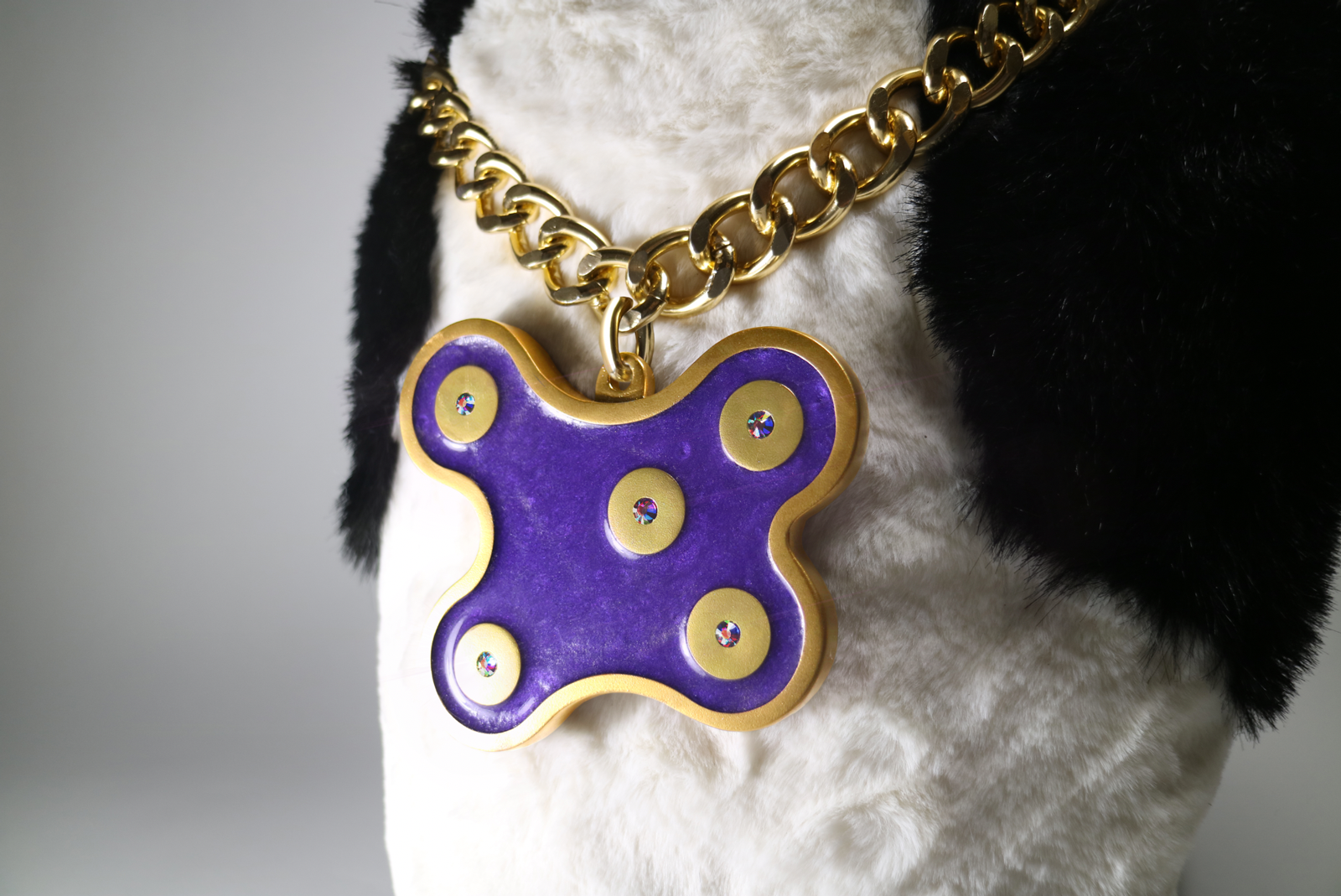 The year is 2028. AI and cybernetically augmented pigs have teamed up to make money on lab grown meat. After centuries of factory farming, the pigs are fed up with exploitation by humans. With the help the latest animal-computer interfaces and AI collaborators, the pigs were able to design manufacture a countertop bacon extruder.

The machine is charged with proprietary capsules that contain pig DNA, and all required growing substrates and nutrients are used in the machine, similar to how a Keurig coffee maker works. In this world, the pigs' AI lawyers have secured rights over all pig DNA, making it illegal for third parties to sell genetic information, or any pig products without consent and not before paying expensive licensing fees.

In this future, the only way to eat bacon is through this proprietary system that ultimately makes the pigs filthy rich. 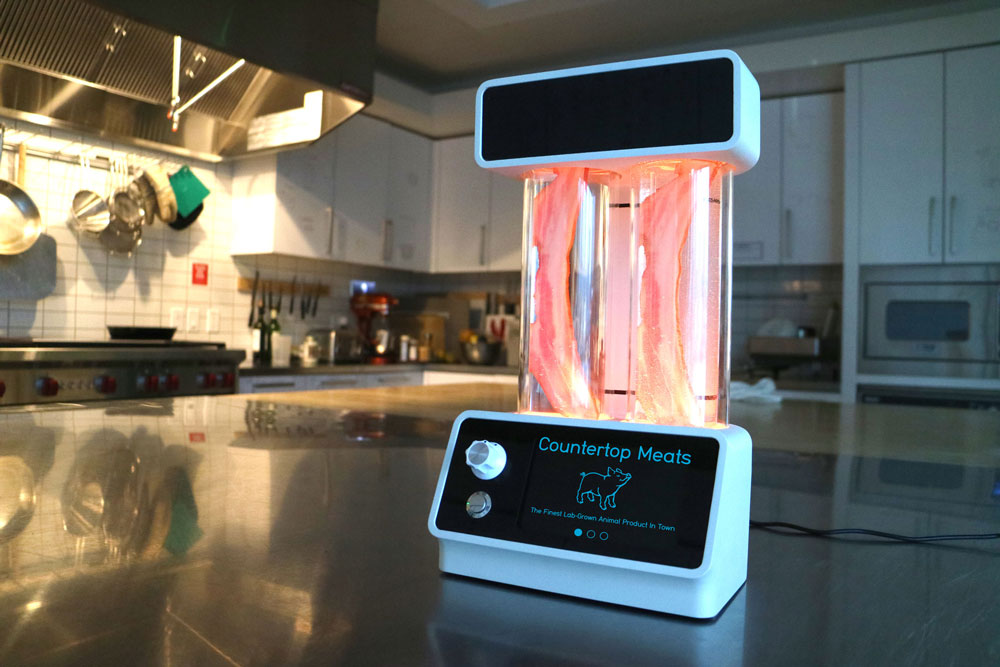 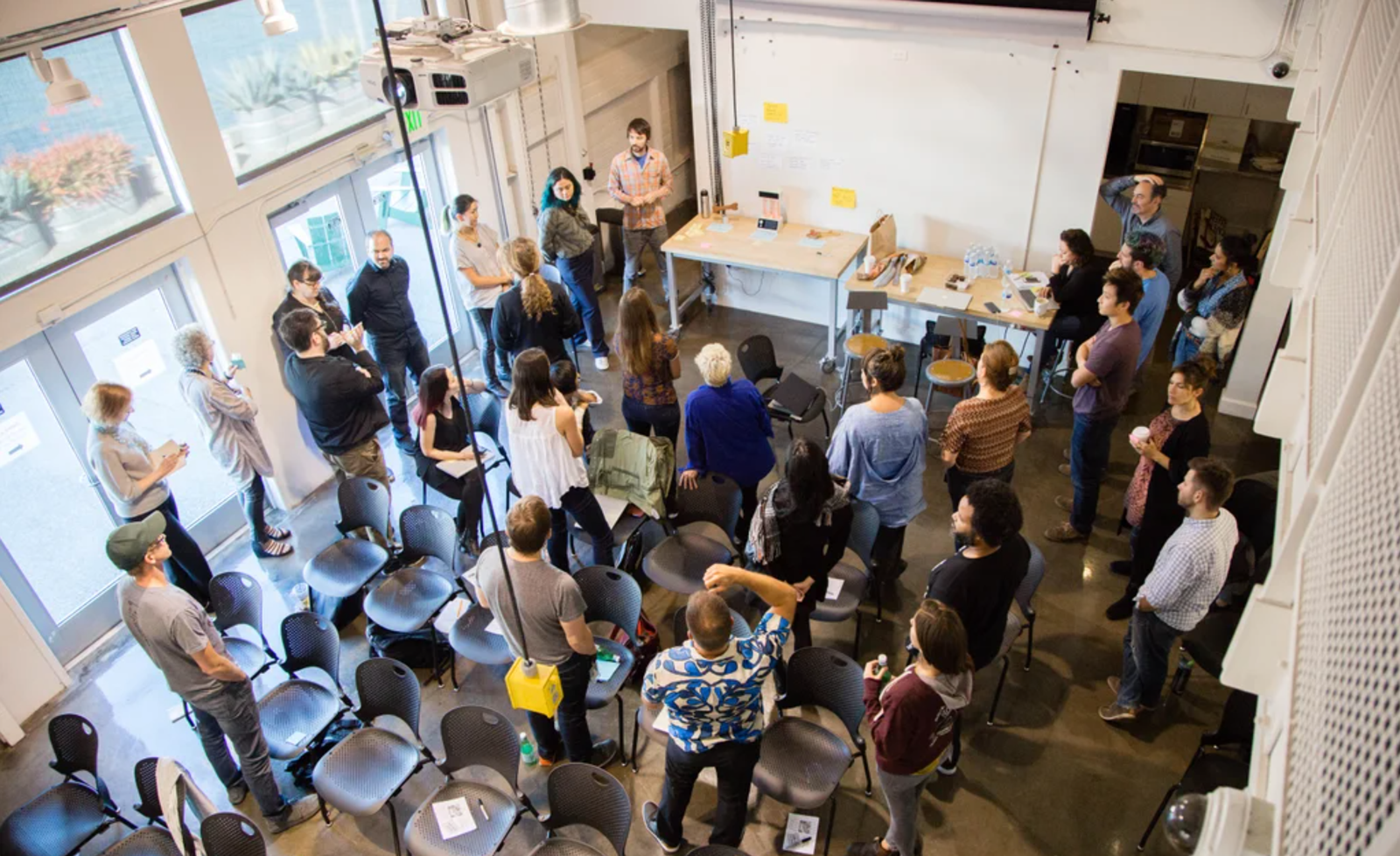 This project was made possible by countless conversations and brainstorming sessions with with the Pier9 Autodesk community. Many thanks to everyone who contributed ideas for future scenarios, and helped me think through the best way to physically manufacture these Artifacts.

If you're interested in learning more about the research process for generating this future forecast scenario, or if you want to see complete documentation on the manufacturing process, check out my Instructables page.